It started over spilled wine. It was one of those events that my friends had dragged me to. A wine appreciation night. “Allie, it’ll be fun!”, they said. I knew nothing about wine but tried to blend in and watched others swirling and tasting their wine. I thought I would give it a go and reached behind me for a glass, just as someone else was reaching for the glass beside mine. Well, you guessed it, both wine glasses toppled over and stained the white tablecloth with red wine.

I was so embarrassed, I wanted to crawl under the table as the servers hovered around as if it was some catastrophic event.

“Quick, put some wine behind your ears. It’s an old Italian superstition and will bring you luck,” said the guy who had spilled the other glass. We both laughed and quickly dabbed our fingers in the spilled wine and put some behind our ears. 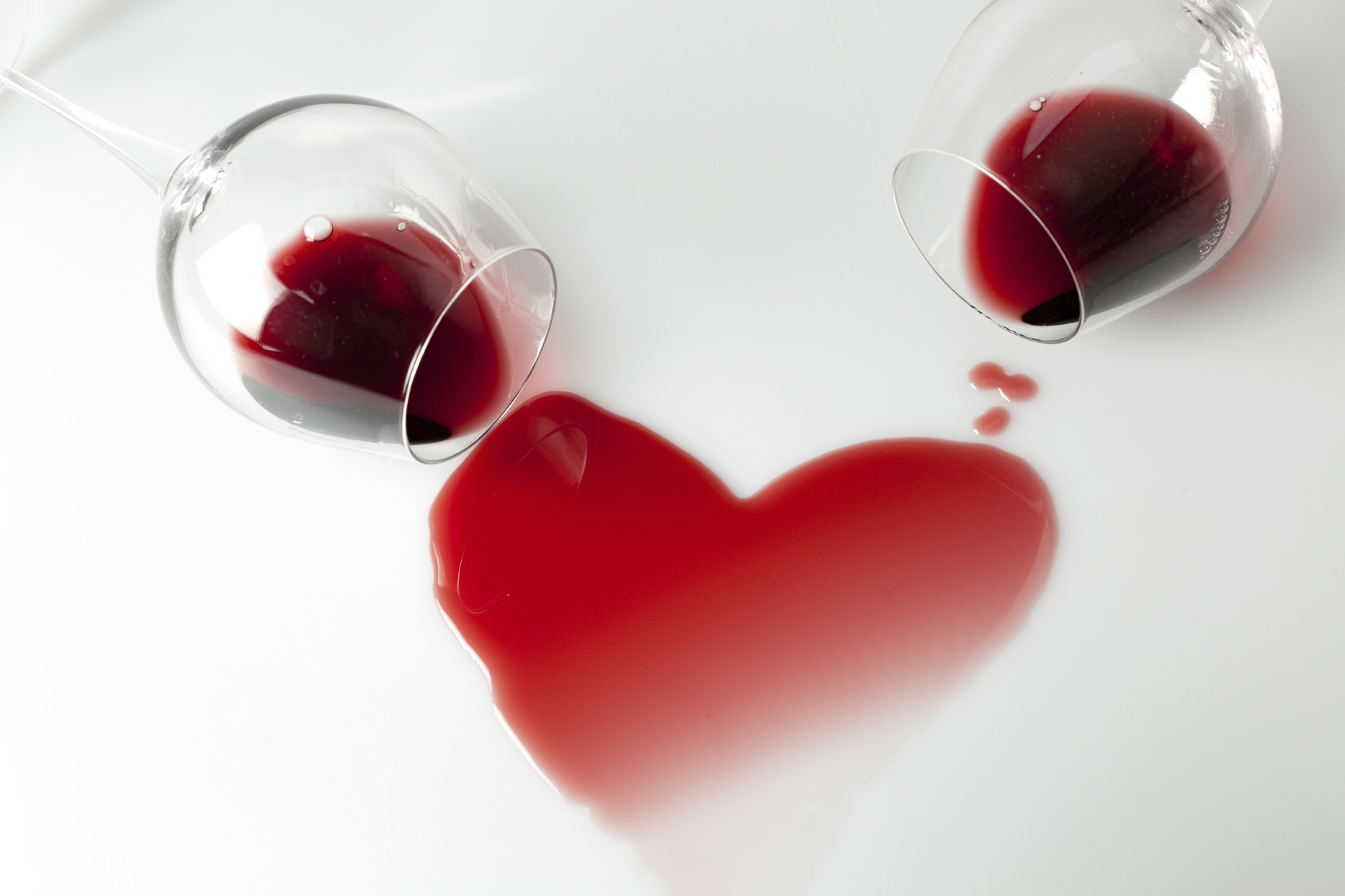 One of the servers looked at the tablecloth and remarked that the stain looked like a heart shape. Maybe it was a sign.

His name was Mark. I probably would have said yes if he’d asked me out, but our timing was off. He was seeing someone, then they broke up, then I was seeing someone, and that broke up. It kept going on like this for years. But we became friends. Best friends. Chatted on the phone and spent time together just “hanging out.”

Those times were the best. Sometimes he’d bring Chinese take-out and we’d watch old slapstick comedies. In between laughing, Mark would pretend to be a food critic, “…the overall texture of the fried rice is further enhanced by the cardboard container taste…” He always made me laugh.

Mark was the kind of friend you shared your deepest secrets with. I even told him that I always wanted to get married in June because my favorite flowers, roses, were in bloom. It’s silly that I told him, but that’s the kind of friendship we had.

And then it happened. It was dark and raining and I was on an unfamiliar road when suddenly a car came out of nowhere and careened towards me. I swerved, but my car went out of control. The car flipped so many times and finally hit the guardrail smashing the hood. They told me I was lucky, but I don’t remember any of it. All I remember is waking up in the hospital and seeing Mark slumped in a chair. The nurses later told me that he had been by my side for five days.

Mark looked up and ran a hand through his hair, “Hey, you’re awake! It’s about time, you know, because they have a waiting list for this bed.” It was just like Mark to try to cheer me up but as he came closer I could see the dark circles under his eyes and the look of concern on his face. And then, without warning, he leaned over and gently kissed me. A nurse entered and Mark cleared his throat and said he’d be back tomorrow. After he left, I touched my lips where we had kissed and smiled.

On the day of my discharge, Mark came in carrying a box.

I opened the box slowly and carefully wrapped in tissue paper was a white tablecloth. But it wasn’t a new tablecloth. It was a tablecloth that I remembered from long ago. A tablecloth with a wine heart stain on it.

My breath caught in my throat and I felt tears well up in my eyes. I looked up at Mark, “You kept it? After all these years? You never told me.”

Mark gazed tenderly at me, “Some things are worth keeping. I thought I had lost you, Allie, and realized that my life wouldn’t be the same without you. Someone once told me ‘You don’t marry someone you can live with, you marry the person who you cannot live without.’ You’re the one I can’t live without. You’re my best friend and I’m in love with you.”

Mark took something shiny from his pocket, and on bended knee, he proposed: “I always thought June was a good month for a wedding. Will you be mine in June and every other month of the year?”

A tear rolled down my cheek.

Mark raised an eyebrow, “And maybe we could spend our life spilling wine together?”

“It’s my wedding day!  It’s June and the roses are blooming.”

One step…“I can’t believe how a glass of spilled wine changed my life.”

Three steps…“We got a wedding gift…a white tablecloth and a bottle of wine.”

Four…“I wonder what our next spilled wine stain will reveal…”

I just wanted to say how thankful I am to everyone who read and voted for my story. I am really happy that this story won 1st place for June. Really, really made my day. Thanks again 🙂

Thank you so much for stopping by and reading my short story submission. A new month. A new short story theme. This month’s theme is “A June wedding” with an 800-word limit. This story was initially going to be about a love triangle, but I decided to change it and I really like how it turned out. What can I say? I’m a sappy romantic at heart. I do hope you enjoyed it.

If you’re interested in submitting a SimLit story or want more information, you can find info on thesims.com forums Monthly SimLit Short Story Challenge and you can also read about it on the organizer’s website HERE. (our dear LisaBeeSims). She also has other links on her site, so check it out!

Be sure to read all of the entries (Novice and Veteran) for the Monthly Simlit Short Story Challenge. There will then be a vote, so be sure to vote for the top 3 short stories in each category.

One more from the reception. They both have the goofball trait. I thought this was hilarious. Sharing the first piece of cake together.

Thank you to the following simmers for creating these amazing builds. Without them, this story wouldn’t have been possible.

The Wine Appreciation Night was held at the Maxis Casbah Gallery in San Myshuno. Just did a bit of redecorating.

Allie’s apartment. This is a room. I added a popcorn maker for their movie night but used another photo instead.

ICU hospital scene. This is a room. I added a few more machines. I was going to put flowers on a table, but normally if a patient is in ICU (Intensive Care Unit), no flowers are permitted.

The wedding venue. This lot is spectacular. There is a reception hall in the basement. The only thing I added was a photo of Allie and Mark, and mirrors behind the wedding arches.

The wild wine spillers, Mark & Allie. They started off as friends but realized they were made for each other. Maybe it was destiny all along. No cc. Created by me. Available for download in the gallery.

View all posts by soulgal7