The words of Keala echoed in her ears. Then, he will, unfortunately, perish beneath the waves with Serena and never be seen again.”

Roxanna didn’t know what to think after she heard what Keala had said. They had to save Rick. They just had to! But which contestant was his one true love?

Suddenly, Roxanna saw a light coming from Keala’s bedroom. “What is that light?” she asked.

Keala turned her head and looked. “That’s unusual. They usually do not appear before visitors.”

“Yes, the island spirits. They are ancient island spirits who inhabit this place. Do not be afraid. They will not hurt you, but I must commune with them to see what they want. Please excuse me.” said Keala as she got up.

Keala went into her bedroom. Roxanna was curious and followed her. Keala spoke to them, but Roxanna did not hear what she said.

“They are here to speak with YOU, Roxanna. They want to impart some knowledge to you. We must all go outside now and they will appear before us,” Keala said as she ushered Roxanna outside.

“They want to talk to me? I…I…I’m a bit nervous about this. What if I say the wrong thing?” Roxanna appeared shaken.

Lia spoke up then, “It is best to just listen and be respectful. They have come for a reason and they will let you know what it is.”

[Author’s Notes: Those lights came from the Kraken’s Grappled Arm statue. And don’t they look like a skull shape?] 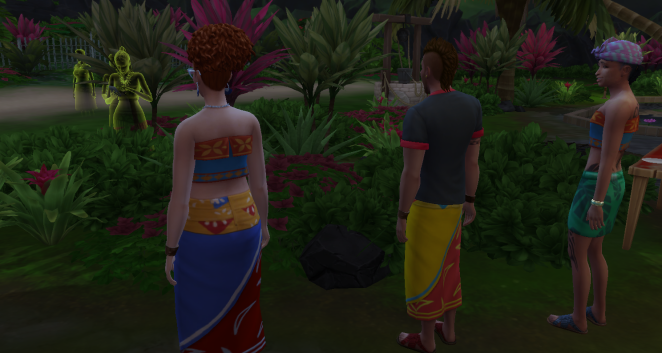 All four of them hurried outside, and there before them were three ghostly figures. Keala went over to one and bowed her head solemnly.

“These are the ones I spoke to you about,” said Keala as she waved her arm towards Roxanna and Benny.

“The woman…she is not one of us, but she wears the traditional dress. How interesting. She is most respectful of our customs,” said the first island spirit.

A second island spirit looked at Benny, “And the male sim, he does not know his gift yet, does he?” Keala shook her head no.

“Bring her to me,” said the first island spirit. Keala motioned for Roxanna to come to where she stood.

“What is your name?” asked the first island spirit.

“Roxanna Llama-Llama,” she said nervously. Roxanna had never spoken to a spirit before. She thought she would faint.

“Keala has told us about you and the male sim. She told me that you will do battle with Serena, the sea witch to save another. You have a strong aura, but you will need more than that to save him,” continued the first island spirit.

The second island spirit spoke then, “You must find the Heart of Sulani. It was stolen centuries ago by a pirate who came ashore and plundered the island. The fire gods became angry and a great storm came up and they rained fire down on his ship. The ship crashed onto the shoreline. The wreckage of the ship is still there and so is the Heart of Sulani.”

The first island spirit spoke again, “Only with the Heart of Sulani can you save the other. It has great power. The power of Sulani is within it.” “Our time is growing short,” said the third island spirit, as she continued, “Heed my words well! To save him, his one true love must become something they are not. Only then can they defeat the evil…with the good of the other. Find the Heart of Sulani…hold it high…and summon the power within…”

Benny came over to Roxanna and steadied her, “Are you alright?”

“Yes, yes, of course, I talk to island spirits every day…” Roxanna joked as she held onto Keala for support as she was feeling kind of woozy.

“Keala, what did they mean when they said, ‘To save him, his one true love must become something they are not.’ I don’t know what they were trying to tell me,” Roxanna said looking confused.

Keala didn’t seem to know either and just shrugged her shoulders, “When the time is near, perhaps it will be more clear to you.”

Benny turned to Keala, “So what exactly is this Heart of Sulani?” he asked.

“The Heart of Sulani is a necklace crafted with a rare stone. A stone with magical properties. And the shipwreck is on Mua Pe’lam. But I am afraid that other sims have searched that area for centuries and have never found it,” answered Keala.

“So why would the island spirits tell me about this necklace if it was impossible to find?” asked Roxanna rather confused.

“Perhaps they believe that you and Benny are the ones destined to find it…” replied Lia quietly.

“Yes! Yes! That’s it!”, exclaimed Keala, “You and Benny have been chosen to help Rick’s one true love save him…” Keala added excitedly.

Roxanna and Benny were speechless.

Below is the actual story associated with the Heart of Sulani. Barnacle Bay is a pirate world in Sims 3. “Jocasta” could refer to Jocasta Bachelor in Sims 3, mother of Bella Bachelor (Goth).

The lot traits of the Chieftain’s Villa is ‘Island Spirits”: “Ancient Island spirits inhabit this lot, visiting frequently. How will Sims choose to interact with them?” These are seen in the bedroom. There is no control over when they will appear.

Keala Hoapili has the “Child of the Islands” trait.: “These Sims experience a spiritual connection to the islands of Sulani, honor the islands by partaking in their culture, summon powerful elementals and reap the rewards of their blessings—or the consequences of their disfavor.” These elementals, which Keala can summon, are ghosts.

View all posts by soulgal7

8 thoughts on “Somebody to Love: Bachelor in Paradise ~ Visit with Keala Hoapili & The Legend of the Sea Witch – Part 2”